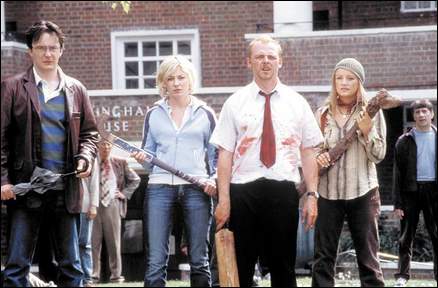 By Ian Winterton
First published in CityLife magazine in April 2004

Blending those evergreen themes of cannibalism and the living dead into a tale of romance, Shaun of the Dead promises to believe life into British films. Again…

Beside him on the comfy-looking sofa is Pegg’s porky buddy, Nick Frost.

“Zombies are shit,’ he says matter-of-factly.

The first time I ‘meet’ Simon Pegg is at the Odeon Cinema, Leicester Square. He’s just introduced the “firstever screening anywhere” of romantic-zombie-comedy (that’s a romzomcom to you, mate) Shaun of the Dead and, while on my way to purchase popcorn, I see him in the corridor. Pale and shaking, he is a picture of abject terror.

This isn’t surprising – as co-writer and star, he has invested several years of his life to Shaun. He needn’t have worried, though – the film is, to use one of Pegg’s favourite self-invented phrases, “fried gold”.

Thursday at London’s Charlotte Street Hotel sees Pegg infinitely more relaxed. Both he and Frost exude the infectious jubilation of two guys who are having a bloody good week – feedback from the screening has been overwhelmingly positive and that bible of the movie industry, Screen International, is going to put them on the cover. The two of them are the living embodiment of a Homer Simpson ‘whoo-hooh!’

Signing Shaun posters when I walk in (“I’m going to draw a knob on this one,” Frost says), they retire to the aforementioned comfy-looking sofa.

“Zombies are shit,” says Pegg, “in that they’re not fast, but they’re scary because they’re like the nightmares where you can’t run away. Even though zombies are slow, you can sprint all you like but they’ll still catch you.”

“We used to plan what we’d do if there was a zombie attack,” Frost tells me. “We decided we’d flee to the Isle of Wight, but every day we’d have to go on patrol because the zombies could enter the water at Portsmouth and walk along the sea bed and then stumble up onto the beach.”

For such rabid zombie fans, it was inevitable that a film like Shaun would come about. Inspired by an episode of Spaced – the surreal sitcom that earned both guys a cult following – in which Pegg’s character, Tim the slacker cartoonist, hallucinated that the zombies from the Resident Evil video game were real.

Pegg says: “Edgar [Wright, director] had so much fun with those zombies that we decided to make a feature film.”

How important was Edgar to the film?

“In many ways he is the project,” Pegg says. “I always said…”

“The owl is the pussycat?” Frost offers.

“The owl is the pussycat.” Pegg nods. “Smokey is the Bandit. I always said Edgar was the third writer on Spaced – he provided the visual side and that’s true of Shaun. Plus, we wrote it together.”

Pegg plays the titular hero, a regular bloke who finds his girlfriend trouble further complicated by a zombie plague. Accompanying him in his battle against the undead is Ed, a lardy Xbox addict played by Frost. Obviously not based on Frost himself in any way – how did he get into character?

“I’m a great believer in the Method,” Frost says in thespy tones. “First, I shaved a hole in my hair because I thought it would be funny for Ed to have this bald patch in his hair – like he’d been jackassed at a party. And [he grins, proudly] I shaved off my pubes. So instead of just acting itchy I’d actually be really itchy all the time”

He looks down at my tape recorder.

This interview first appeared in City Life Magazine in 2004.