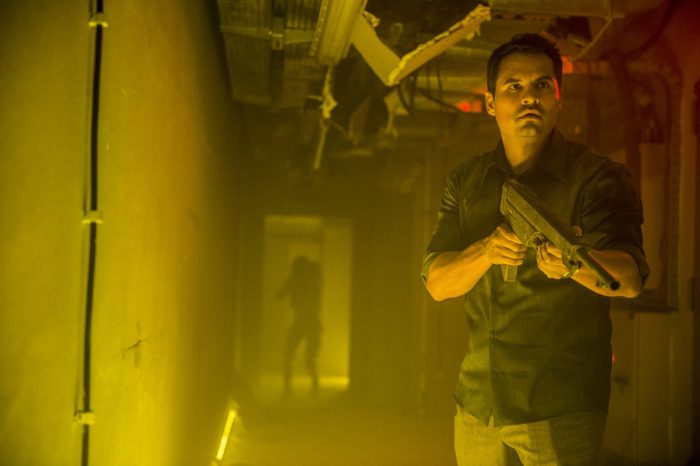 Everything is not what it seems in Netflix’s surprising, though-provoking sci-fi actioner.

On the back of the woeful Cloverfield Paradox and the disappointing How It Ends, Netflix latest sci-fi commission at least has the distinction of being watchable. It’s no masterpiece, though. The plot is smart, in a sort of sub-Philip K Dick short story sort of way: in an unspecified near(ish) future family man Peter (Michael Peña, excellent) is beset by nightmares of an imminent alien invasion that – when a murderous attack fleet descends from the sky – he comes to believe are, in fact, prophetic visions. The truth is more complex (and pleasingly clever) with a series of great reveals at and after the midpoint.

Before that, this is more of a straight-forward action flick, as enemy foot-soldiers go door-to-door in Peter’s apartment block, gunning down everyone they see. It’s brilliantly done and the tension is palpable as Peter, his wife (Lizzy Caplan) and two adorable kids (Amelia Crouch, Erica Tremblay) battle their way from the block down into the city’s tunnels and, they hope, to sanctuary with Peter’s boss David (Mike Colter). But on their tail is an apparently vengeful soldier, intent on recovering the gun Peter stole from him during an early altercation.

To fully discuss Extinction would require a mahoosive spoiler, but suffice to say everything is not quite what it seems on the surface. Anyone thinking this is just another War of the Worlds re-run will be surprised at the destination the movie takes us to. It’s deftly plotted and all the jigsaw pieces slot into place come the closing few minutes, with an ending that’s morally complex and thought-provoking. It’s all done and dusted in 95 minutes, which would normally be a big plus point. Here, though, you’re left feeling they could have given us a little more breathing space to digest the twists and turns; instead, in hurrying to its conclusion, it snaps the audience away from the story just as they’re getting their heads around it.

This is a far cry from truly masterful sci-fi chamber pieces such as Ex Machina or Moon, but there’s lots to recommend, not least the cast and the visual effects.