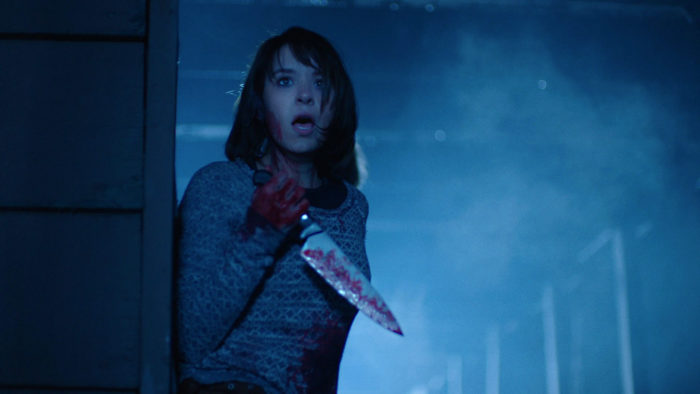 For those in need of scares and splattery gore, Dead Night fits the blood-soaked bill.

A favourite of the horror festival circuit this last year, Dead Night is an entry into the much-crowded sub-genre of splatter-gore. Very 80s in tone, it delivers its palpably nasty sequences with glee, providing chuckles along with some very effective jump scares.

The plot is corny, of course: a wholesome family unit – Dad recovering from cancer – head out to a remote cabin in the woods, built on a spot renowned for healing. Suffice to say, not a lot of healing takes place. The set up for the ‘bad stuff’ is unnecessarily complicated, beginning with a prologue taking place in 1961, which, with a gruesome murder and a horrific scene of demonic childbirth, sets the pleasingly nasty tone – it’s hard to achieve an R-certificate these days, but Dead Night gets there in its opening minute. From 1961, we fast-forward to 2015 and meet mom Casey Pollack (Brea Grant, best known as Daphne in TV’s Heroes; excellent) as she drives her husband James (AJ Bowen), two teen kids Jessica (Sophie Dalah) and Jason (Joshua Hoffman). Accompanying them is Jessica’s buddy, shy Becky (Elise Luthman).

From this very standard set-up, Dead Night does try something different structurally. We’re suddenly shown a TV, flickering out in a clearing in the woods, that’s playing TV show Inside Crime – a documentary detailing the butchering “three years ago” of the Pollacks by notorious “axe mom” Casey. While it apparently lets us know early on that nobody makes it out alive, nothing is quite as straightforward as that – especially when a woman named Leslie Bison turns up at the cabin.

Played with trademark élan and menacing camp by horror legend Barbara Crampton (Re-Animator, Chopping Mall, You’re Next amongst many others), Bison first appears as a prospective candidate for senate in 2018 during an ad after Inside Crime, but we then see how she infiltrates the Pollacks’ cabin and unleashes hell. It’s all very silly, and becomes increasingly ridiculous – and less frightening – as it progresses. It does deliver some fantastic scares and lashings of gore and 80s-style body-horror, all achieved with impressive old school, in-camera effects – heads crack apart, zombie-things shuffle along with broken limbs and weird blobby-spiky things bury into people’s necks. In short: it’s nuts. For those in need of scares and splattery gore, Dead Night fits the blood-soaked bill.