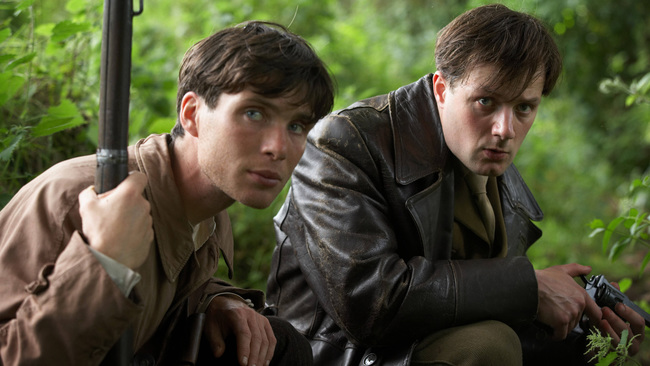 Ireland 1920. Newly qualified doctor Damien (Murphy) abandons his plans to begin work in a London when British troops, the notorious Black and Tans, brutally murder one of his childhood friends. Together with his brother Teddy (Delaney), the newly radicalized Damien swears an oath of allegiance to the nascent IRA and joins a ‘flying column’ – a mobile active service unit specializing in countryside ambushes. As the war rages on, Damien’s socialist leanings clash with Teddy’s more pragmatic approach until, as the revolution turns into civil war, they find themselves on opposing sides.

To say that Ken Loach’s latest is his best for years isn’t to denigrate his outstanding Scottish trilogy (My Name Is Joe, Sweet Sixteen and Ae Fond Kiss), it’s just that The Wind That Shakes The Barley is quite possibly the veteran director’s masterpiece.

From its establishing shots of a drizzle-shrouded hurling match (bringing to mind the footballing sequence in the film that made Loach’s name back in 1969, Kes), the film is utterly compelling. As befits an event as complex as a revolution, it’s a solemn and serious film, but it also engages brilliantly on a human level. Through Damien, brought to life by a thoroughly convincing Murphy, screenwriter Paul Laverty provides us with a guide through the major events in that early Republican struggle. Peace loving, he’s reluctant to take up arms at first. But, as is so often the way, once converted he becomes an unbending zealot – able to grimly justify, not merely the shooting of British soldiers, but unarmed English landlords and ‘traitors’ he has known since childhood.

Despite Loach’s reputation for political didacticism, in truth he usually cuts a more ambiguous path. He even spares a thought for the British soldiers – painting them (as he did in one of his early films, Days Of Hope) as shell-shocked veterans of the Great War who are just as much victims of British imperialism as the Irish.

One of the film’s masterstrokes is that it doesn’t, as Hollywood might, end the story with Ireland winning partial independence in 1922. By following Damien and his comrades as their solidarity is torn apart by civil war, the film meditates on both the destructive downside to extremism and the false allure of peace and compromise. “Send out the Black and Tans,” mutters Damien. “Send in the Green and Tans.”

Loach, incapable of making a bad movie, is on fire here. A masterfully executed mix of politics and passion, this is an example of that increasingly rare beast in modern cinema: a serious, thought-provoking film for grown-ups.

This review first appeared on the FilmFour website in 2006.