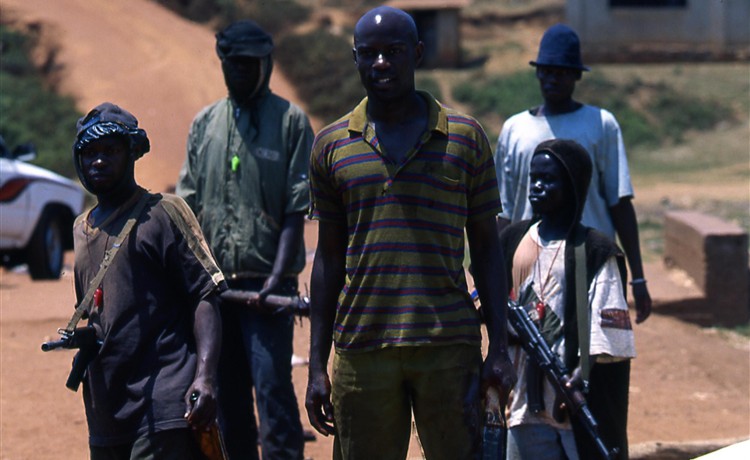 Most people in the West hadn’t heard of Rwanda prior to April 1994, when a million Tutsis were murdered by the Hutus. It was the worst case of state-sponsored genocide since the Nazis but the Western powers, then half-heartedly intervening in the former-Yugoslavia, didn’t lift a finger.

“I didn’t know anything about it,” admits Michael Caton-Jones, director of Shooting Dogs, a film depicting the massacre of 2,500 people at Kigali’s Ecole Technique Officielle. “And I felt that if I, as a relatively smart person, don’t know about it then I’m damn sure a lot of other people don’t.”

Long established as a Hollywood director (Memphis Belle, The Jackal, Rob Roy and the forthcoming Basic Instinct 2), Caton-Jones seems an unlikely candidate for a gritty ‘issues’ movie. But, as the Scottish-born director explains in his Connery-esque rumble, he was looking for a change of pace. He got it. As well as spending five months in Africa, dealing with BBC Films proved a culture shock.

Caton-Jones’ first obstacle was persuading said executives that the film should be shot in Rwanda and not, like last year’s Hotel Rwanda, in South Africa.

“There’s a tax deal if you film in South Africa,” he says, “but within five minutes of landing in Rwanda I knew we had to film there, not least because of the intangible benefit of being amongst the Rwandans. Because, not wanting to paint myself as a saint, I realised this wasn’t about me, it was about them.”

And so it was that the film’s cast and crew came to be comprised of people who had survived the genocide. Which made the job of Claire Hope-Ashitey, the 17-year old London-born actress brought in to star as a Rwandan schoolgirl, somewhat daunting.

“I felt really inadequate to begin with,” she admits. “I felt like I was intruding. But everybody was so welcoming.”

As Marie, a track-and-field prodigy, Ashitey’s running tops and tails the film. She laughs, confessing to having, ahem, “exaggerated” her athletic skills to Caton-Jones.

“I thought it would be fine but the first few days I was there, that’s all I had to do – run up and down. I’ve never ached so much in my life.”

Both as athlete and Rwandan, Ashitey convinces utterly, an achievement made all the more astounding upon discovering that, although she will soon be seen alongside Clive Owen and Michael Caine in the Alfonso Cuarón-directed sci-fi Children Of Men, Shooting Dogs was her feature film debut.

If Ashitey’s time sounds challenging, for Caton-Jones and his production team it was a logistical nightmare. Not only did virtually every scene require the marshalling of hundreds of extras, but the shoot was filmed at the Ecole Technique Officielle itself. Although a vital component of the film’s dusty, sweaty and, inevitably, bloody realism, it created some disturbing problems.

“The school was still in use while we were filming,” says Caton-Jones says. “There was one instance where we had the actors playing the Hutu mob outside chanting the songs that would have been heard at the time. Some of the teenage pupils, who had survived the massacre as young kids, just completely melted down and went into traumatised shock. Some of them had to be hospitalised.”

Although regret is evident in Caton-Jones’ voice, he has no time for commentators who feel that, by telling the story through two admirably brave white characters (John Hurt and Hugh Dancy), Shooting Dogs is side-stepping colonial guilt.

“Ask a Rwandan if they’re offended,” he instructs Hotdog, sharply. “They didn’t care that it was two white men taking you into this story – they understand it’s because I didn’t make it for them. They know what happened and I made it with their blessing.”

“They were so happy that someone was trying to tell their story. People came up to me all the time and said, ‘Thank you for doing this.’”

“It’s a fatuous argument,” Caton-Jones continues. “It’s the sort of thing people come out with at a dinner party in someone’s luxurious Western home. Accusations of racism tell you a lot more about the person throwing them out. Some things are more important than the colour of your skin. To me it’s, like, give yourself an award for missing the point.”

First published in Hotdog Magazine in 2005.