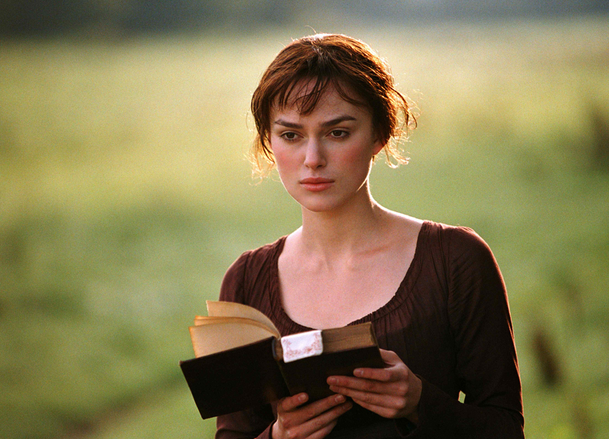 “I must confess that I think her as delightful a character as ever appeared in print, and how I shall be able to tolerate those who do not like her at least, I do not know.”
– Jane Austen

Almost two centuries after its publication, Jane Austen’s Pride and Prejudice remains one of the world’s best loved books, primarily because its heroine, the young, feisty Elizabeth Bennett, is such good company; were she still alive, it’s doubtful that Austen would have her tolerance tested by many people. Keira Knightley certainly isn’t one of them.

“I think she’s one of the best roles in literature,” Knightley says, speaking to Leeds Guide from the suitably grandiose surroundings of London’s Dorchester Hotel, “so there’s a huge pressure. It’s terrifying because when you read Pride and Prejudice, you feel like you own her. I know I did. Everybody has a very clear idea of who Elizabeth Bennett is. It’s terrifying but a really exciting challenge.”

A challenge Knightley brilliantly squared up to – her Elizabeth Bennett is perhaps her strongest performance to date. Whether exhibiting defiant independence or melancholic heartbreak, she perfectly captures Austen’s heroine. Except in one regard: Elizabeth is supposed to be rather average-looking – her sister Jane is the real beauty – and Knightley, well… Just look at her.

It doesn’t detract from the film, however, especially as Jane is played by Rosamund Pike, former Bond Girl to Pierce Brosnan, an English Rose whose beauty does outshine Knightley’s. We don’t get into that here, of course, and Knightley gives the impression that, far from being rivals, the two actresses were as close in real life as they appear on screen.

“Jane Austen’s own critique of her book was that she felt it was too light-hearted,” says Knightley. “She felt the relationship between Jane and Elizabeth wasn’t realistic enough. We took heed of her comments and tried to bring some realism to the movie, bringing out the idea that these sisters are two girls who have lived with each other and slept in the same bed for so many years now. They have annoyances and such, but they love each other.”

“Yes, we’re both in the Johnny Depp club.
I’m a bit jealous of Rosamund because
she got to kiss him and I didn’t.” 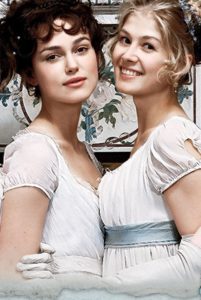 The only fly in the ointment of sisterly affection is Johnny Depp. Both actresses have worked with him, Pike on 2004’s The Libertine and Knightley on the Pirates of the Caribbean films.

“Yes, we’re both in the Johnny Depp club,” coos Knightley, before admitting, “I’m a bit jealous of Rosamund because she got to kiss him and I didn’t.”

Knightley might have missed out on locking lips with Depp but, as Elizabeth, she was required – eventually – to get amorous with the dashing Mr Darcy, played by Matthew MacFadyen. While he doesn’t quite manage to banish the wet-shirted spectre of Colin Firth, MacFadyen is undeniably a handsome chap. Knightley very obviously approves.

“Matthew’s sexy in the mode of Richard Burton, with a bit of Alan Rickman,” she gushes. “You need to see that kind of rugged beauty in Darcy, knowing that here is a man who walks across fields, climbs trees and manages his own estate. With Matthew, you can see that etched across his face, yet he’s also got this extraordinary vulnerability.”

Knightley’s admiration isn’t limited to Mac Fadyen’s looks. He is, as anyone who’s caught him on TV’s Spooks, a terrific actor.

“When I went in to read with Matthew, I was so blown away that I virtually couldn’t get my lines out,” Knightley confides. “I just kept staring at him thinking, ‘What the hell happened between you walking in as Matthew and you starting to read?’ Because he actually did turn into Darcy. On the page, Darcy reads as being very cold, but Matthew is so vulnerable through his big manliness that he gives Darcy extra qualities.”

The other man in Elizabeth Bennett’s life is her elderly father. Although a small part, Mr Bennett’s cantankerous but loving personality permeates the story, requiring an actor blessed with incredible presence. With Donald Sutherland, the production got that in spades.

“He was completely amazing and such a sweetheart,” says Knightley. “I think he loved having six women fussing over him all the time. We went out to a party and he wore a mask because he hates smoking.”

Knightley evidently loved every moment of making Pride and Prejudice – even the costumes were less onerous than in other period pieces she’s starred in.

“The Bennett girls are supposed to be quite active,” explains Knightley. “It’s really important that you get a sense that they could run around and walk for miles in their clothes. The corset I wore was very mild compared to the thing I wear on Pirates of the Caribbean.” She pulls a face, recalling the discomfort. “It comes all the way down and pulls in the stomach and everything and you can’t breathe at all.”

The costumes also helped Knightley and her co-stars get into character, particularly when it came to reacting to the opposite sex.

“When the men in the cast stood around in their normal clothes, we Bennett girls could chat away to them,” Knightley says. “As soon as they wore their costumes, the sisters, myself included, were suddenly faced with these sexy creatures and we turned into giggling idiots. They were so well-costumed!”

Period costumes have been a feature of Knightley’s career, with many critics – conveniently ignoring films such as Love, Actually, Bend It Like Beckham and forthcoming bounty-hunter actioner Domino – accusing her of becoming typecast. Knightley brushes such accusations aside.

“What excites me about acting is changing as much as possible from character to character,” she enthuses. “I don’t want to become typecast but, if I read a script that has a fantastic story, a fantastic character and a fantastic director, not do it just because it’s set 200 years ago would be foolish.”

There was, basically, no way Knightley could or would turn down Pride and Prejudice.

“It’s a book that I’ve been obsessed with since I was seven years old,” she confesses, “so the opportunity to play Elisabeth Bennett was a dream come true. I just pounced on it.”