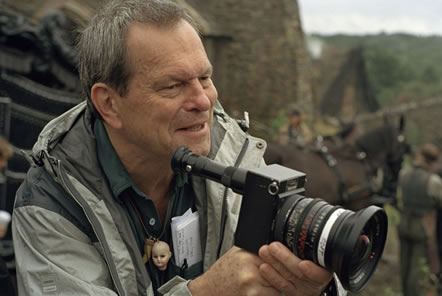 “I was always drawn to the Grimms for the primal nature of their stories,” says Terry Gilliam, adding with a grin. “I like the darkness.”

No kidding. The latest movie from the maverick director, a fantastical account of how the Brothers Grimm (played by Matt Damon and Heath Ledger) came to know so much about fairytales, is full of supremely dark moments. A horse swallows a child, a scary wolfman goes on the rampage, a cute kitten gets liquidised and a young girl has her eyes, nose and mouth erased by a mud monster…

“I was always drawn to the Grimms for the primal nature of their stories.I like the darkness.” 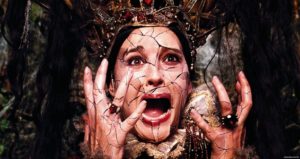 “It would have been nice if we could’ve got a PG in the States,” says Gilliam. And he’s not joking; he’s genuinely puzzled that adults deem the film too scary for children. And he’s got a point. Yes, the film is macabre but, as is often the case with Gilliam’s work, it’s tempered by a warm-hearted sense of ludicrous. It’s frightening in the same way that, well, the best fairytales are.

“I got a lot of notes saying that it’s too rough for children,” Gilliam recounts. “That’s false. The movie plays brilliantly for kids. Somehow people think fairytales are things with tinkly music and lots of people in pink but Grimm’s fairytales were dark so that was really important for me  – not to do some modern, PC, bland version of what fairytales were about. Fairytales scared the shit out of me when I was a kid. They also gave me immense pleasure because you go to dark places but, at the end, you come out alive.”

With its unique combination of nightmare, whimsy and dark humour, The Brothers Grimm is unmistakably a Terry Gilliam film, bringing to mind his other ‘family’ oriented movies such as Time Bandits (1981) or 1977’s medieval romp, Jabberwocky. This will be joyous news to his fans, but those who prefer him in more conventional mode (Twelve Monkeys, The Fisher King) may well be perplexed and frustrated as they were by the love-it-or-loathe-it excesses of The Adventures of Baron Munchausen (1988).

Of course, the root of Gilliam’s aesthetic can be summed up by a certain dread adjective: “Pythonesque.” As the only American member of legendary comic troupe Monty Python, Gilliam was initially brought on board by John Cleese to provide the TV show’s inimitable cartoon inserts. Still friends with the surviving Pythons, Gilliam is sanguine about his inability to shake off his roots.

“According to some of the reviews of Grimms I obviously haven’t,” he admits. “It’s always going to be there because I’ve got that same sense of comedy. I love it. I love over the top performances.” 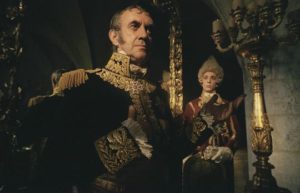 And The Brothers Grimm has them in spades. Not only does Peter Stormare (seen recently as Satan in Constantine), chew the scenery as an idiotic Italian mercenary, but Gilliam is once again reunited with Jonathan Pryce. Having starred as a beleaguered bureaucrat in Brazil, here he pops up as a general in Napoleon’s army, complete with silly French accent, in many ways reprising his role as Baron Munchausen’s unimaginative bean-counting nemesis to. This triumph of the fantastical over rationalism is another key theme of Gilliam’s films.

“We’ve let that side take over to much,” Gilliam opines. “Everything has to be explained and understood as opposed to allowing for the mystery wonder that’s possible in life. The Grimms are connected to this because it’s important to remember that they didn’t write the fairytales, they collected them. With the Enlightenment sweeping in and putting pressure on the old prejudices and superstitions, they were afraid that Germany’s old traditions were disappearing.” 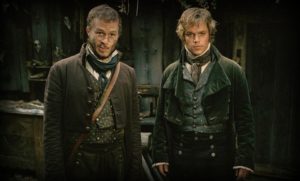 By setting the Brothers Grimm in a historically accurate setting of Napoleonic Europe, Gilliam is able to explore this theme, albeit with full-on fantasy elements. An added bonus for the director, if his mischievous cackle is anything to go by, seems to be that he gets to mock the French.

“It opens with a caption saying ‘French occupied Germany’,” he laughs. “I love being able to say that because it’s wonderful and it’s historically accurate. It’s good to remind us that the Germans have not always been the aggressors. The perverseness of showing the French as the bad guys was too good to not deal with.” 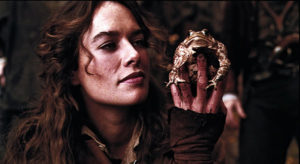 Evil witches and enchanted forests notwithstanding, The Brothers Grimm is a gritty, bloody and muddily authentic version of history, typical of Gilliam. This extends to some gruesome scenes in which Angelicka the hunter, played by Huddersfield-born Lena Heady, is seen skinning and gutting a rabbit. Not only did this contribute to the film’s PG-13 certificate, but it caused Heady, a strict vegetarian, much consternation. Predictably, this is a source of great amusement to Gilliam.

“We booked Lena Heady a week with hunters to train her how to skin a rabbit. They only got to show her once. But she saved a rabbit’s life. I was preparing little bunny for the shoot and she ran off with it and kept it.”

“We booked her a week with hunters to train her how to skin a rabbit,” he chortles. “They only got to show her once. But she saved a rabbit’s life. I was preparing little bunny for the shoot and she ran off with it and kept it. In the film it’s a plastic rabbit with lots of condoms full of blood and guts, but it was really hard for her to do that, even with the plastic one.”

Bemused disapproval of Heady’s principles aside, Gilliam is full of praise for the Yorkshire actress.

“She’s a good actress,” he says, “and she worked very hard because she’s not normally a horse-riding, bow shooting kinda gal. She just got into it and I think the end result is fantastic.

“We did terrible things to her, though,”  he continues. “Like putting her into a room with no light to get her used to living in a cave so could escape from being a modern girl and become a kind of feral creature.”

The thought of Gilliam bundling Heady into a dank cell brings to mind his turn as the feeble-minded gaoler in Life of Brian (most quotable line: “We’ve got lumps round the back”) which, of course, brings us back to Monty Python. 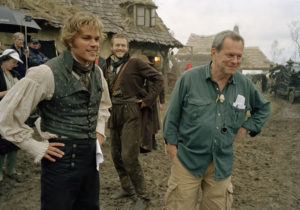 “It’s very bizarre,” he says of the show that launched him. “We’ve each done a personal best that’s coming out on DVD soon and looking at the episodes today it’s shocking how bad it is. It’s so cheesy, it’s so cheap and yet it’s still really funny. Nothing’s come along and matched it. I don’t know why. The League of Gentleman I loved because I thought they captured a similar grotesqueness. But that ‘ex-Python’ thing will always be there. It’ll be on the gravestone, depending on what I do next. Maybe,” he chuckles, “it will say ex-Bond Girl…”

Now that really would be a dark fairytale.