WELCOME THE NEWCOMERS TO THE HARRY POTTER UNIVERSE…

Were you a Harry Potter fan before you got this part?
I’d never read any of the books and hadn’t seen the movies either, so I can’t really claim to have been a fan. I say I’m a fan of Arsenal and I don’t know anything about them – it’s kind of the same thing. When I got told I had the audition I read the book in, like, a day and knew that I’d love the part. I think there’s something really special about the books and I think people are going to watch these movies years from now.

Your character is part of a love triangle with Cho Chang and Harry – is he sympathetic?I think Cho wants to be with me more – I’m not standing between anybody! He should be a sympathetic character, but there’s a thing about head boys – a lot of people hate them for no reason, especially if they do everything right. But Cedric is just a quiet guy who instinctively doesn’t do horrible things – so hopefully he’ll be sympathetic. His main description is the ‘strong, silent type.’

Was it a thrill working with Mike Newell?
It was a thrill being part of Harry Potter – it’s like being part of the Bond Franchise. But Mike Newell – I loved Donnie Brasco. He’s a great director. I got on with him really well and I really liked him.

Did you get starstruck by any of the other actors?
With Alan Rickman I don’t think I knew what to say to him the whole way through. Warwick Davis, who’s Willow, I did a scene with him and I was, like, completely and utterly… ‘You know, because Willow was my favourite film in my childhood. He was the only person I asked for an autograph out of all of them.

What was the hardest scene?
Well – my death! 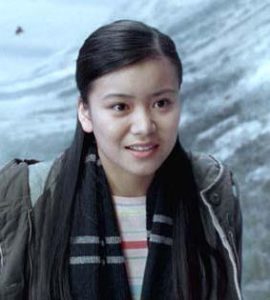 You beat 5,000 people for the role of Cho Chang. That must have been nerve-wracking…
Because I just went for a bit of fun, I was really relaxed about the whole thing! I’ve not really thought about it until people started saying ‘Well, you beat 5,000 girls!’ and that’s when I think, ‘Yeah. I did!’ I’m really surprised because I’d never acted before and didn’t realise I could act until I went to the auditions.

What made you want to audition, because your dad has said you’d never even acted in school plays before?
It was such a coincidence: he was watching TV and he was practically falling asleep when the advert came on saying ‘If you’re 16 and you’re a girl and you’re of Oriental appearance and you come from Britain – then you should try out for a role in Harry Potter.’ And he thought that sounded like me.

Did you have to lose your Scottish accent?
No I didn’t I got to keep it – yeah, it was great. The book doesn’t really mention what kind of accent she has so everyone’s going to expect an English accent so when I do speak I think it’s going to surprise a few people, which’ll be cool.

Do you get to kiss Daniel?
You’ll have to wait and see! But the scenes we had involved a lot of teasing – looking but no touching because I have a boyfriend in this film.

Is it true you’ve received hate mail from jealous girls?
No. I’ve received so much fan mail and they’re all so supportive, and it’s really encouraging. I mean. I’m sure there are a few jealous girls because Dan has so many female fans.

In a film dominated by boys, did you form a bond with Emma?
Yeah, we did, we had a good chat. Obviously she’s given me some advice and I was asking her about the premiere – what it’s going to be like and she was telling me to make the most of it. ‘It’s your day, it’s going to be amazing so just enjoy it.’ And she also said keep level-headed and stay grounded.

Do you see acting as a career now?
If it was the same with every film as it was with Harry Potter then definitely. I’ve had the time of my life doing this. 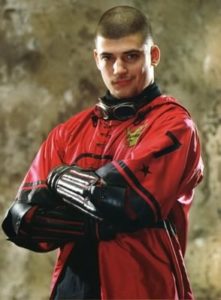 Were you a fan of the Harry Potter stories before joining the cast?
I was a fan but I hadn’t read the books – I’d only seen the films. As soon as I got the part I read book number 4 and I studied Viktor Krum so I could bring him to life in the film.

What do you like about Viktor?
I actually like everything about him – he’s a superstar in Quidditch, he’s obviously the champion of Durmstrang, so he’s the best boy in the school! He’s quite a tough character – physically he gives an impression of power whatever he does, but at the same time he’s got a big heart. I like every aspect of him – he’s quite similar to me!

Acting’s in your family?
Yeah, well it’s sort of in the roots: my grandma acted in black and white Bulgarian films and my dad’s been in two films. He was spotted and asked to be in two films and my mother’s been in a couple as well but not professionally.

Did you want to go into acting?
Like everyone, when I was young I dreamt of being a Hollywood star but I never thought it could happen. A year ago I was a normal guy and now I’m sitting here having interviews!

Did you train for the film?
Well I’m always been training but during filming we have to do loads of specific training for the tasks. For the underwater scenes we had to learn how to scuba dive and how to take masks off underwater and there was a scene where Viktor dives off the Durmstrang ship so I had to learn how to dive for that.

And how were the ballroom dancing lessons?
We had a choreographer for the Yule Ball and I think we were training for about two weeks. We were supposed to be doing a Waltz but it’s actually a bit more than a Waltz because it has special music which everything is designed for – so it has to look magical. We had great fun and it’ll hopefully look good on screen.”

Have you been surprised by the Harry Potter fans?
Yes. I’ve been on the internet becauseI want to see what they think of me as Viktor. He’s quite skinny in the book and I don’t quite look like that! They were quite positive comments. It was really funny reading about the hair – in the book Viktor’s hair is long but mine’s short in the film.

Are you looking forward to the premieres and having girls screaming at you?
Definitely, but I don’t know how much they’ll be screaming for me!

This article first appeared in The North Guide in 2005.