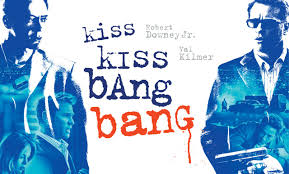 As you’d expect from Shane Black, the man who created Lethal Weapon, Kiss Kiss, Bang Bang is a buddy movie. This time, though, it isn’t tough-guy cops but a gay movie producer and a petty criminal, thrust together in a complex comedy-noir set in present-day Hollywood. Black, who also makes his directorial debut, has penned possibly his finest script ever but it’s the chemistry between the buddies – Val Kilmer and Robert Downey Jnr – that makes the film.

Both stars were something of a gamble for the production, Downey Jnr because of his epic battle with drugs and drink, Kilmer because of his reputation for being an egomaniacal tosspot. City Life meets both men on the same day in different rooms of London’s Claridges Hotel. For the record, Kilmer is genuinely charming and Downey Jnr, though overly effusive and hyperactive, is, simply, a lovely guy.

“There are a lot of mean, twisted, tortured people in our business but Robert didn’t do any bad things to other people, he did them to himself. He always had a lot of love and support in the community and Hollywood does so love a comeback.” 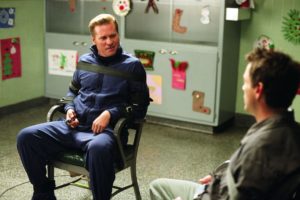 “He’s just so happy he didn’t die,” is how Kilmer affectionately describes his co-star. “Doing this was just so much fun because it’s a wonderful thing to see someone as loveable as him make it back. There are a lot of mean, twisted, tortured people in our business but Robert didn’t do any bad things to other people, he did them to himself. He always had a lot of love and support in the community and Hollywood does so love a comeback.”

Downey Jnr himself isn’t keen to talk about his addictions, mainly because “it’s all I seem to talk about sometimes” but he does wax lyrical about the two things that have helped keep him straight: kung fu and marriage.

“I’m about halfway to black belt,” he says shyly, “but I know nothing. I can defend myself against practically anybody but, in terms of hurting somebody… Well, I wouldn’t want to. The headlines! ‘His hands were registered as lethal weapons!’ I don’t want a martial art that’s aggressive. I’m angry enough as it is. I want to be like Neo at the end of The Matrix.”

His wife, Susan Levin, is a film producer and it was through her that Downey Jnr first heard about Kiss Kiss, Bang Bang.

“She’s reading this script and laughing,” says Downey Jnr, “and that’s unusual so I ask her what’s so funny and she’s, like, ‘Oh, nothing, just this Johnny Knoxville project.’ She keeps reading and laughing and she tells me, ‘The just had his severed finger that he had on ice stolen by a dog.’ ‘What was his finger doing in an ice bowl?’ ‘His girlfriend cut it off.’ ‘Why didn’t he go to hospital?’ ‘He did but it got pulled off again by these two bad guys called Mr Frying Pan and Mr Fire.’ When I heard that I just had to be in this movie.” 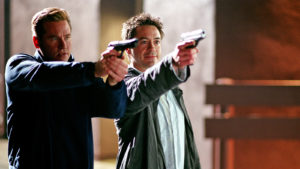 While Downey Jnr landed his first lead in years, for Kilmer the film was a chance for him to remind the world that, despite Alexander and Batman Returns, he is a fantastic actor.

“It’s a finicky business,” says Kilmer philosophically. “There are rules in Hollywood. You have to do certain things, even if you’ve just made a billion dollars. But, despite making some wrong choices, I think I’ve been pretty lucky in that I’m still working. I’m like Robert in that respect.”

That the two men obviously like one another translates into some crackling on-screen chemistry and some inspired improvisation.

“He’s Val goddamn Kilmer,” says Downey Jnr. “He’s amazing. The stuff he came up with on the spot was great. Like when he’s supposed to tell me to put my cigarette out and I ask him where and he just deadpans, ‘Throw it in that clump of dry bushes, you moron.’”

“Having Robert playing a dumb guy was really fun,” laughs Kilmer, “because he’s actually very smart but because he’s acting dumb he can’t say anything back to me.”

Though they evidently loved riffing, both men are keen to reiterate the importance of Black’s script, even if they sometimes forgot that on set.

“Improvisation is something he encourages,” says Downey Jnr, “but sometimes he’d get pissed. ‘Guys! Before you improvise all over my dialogue can you at least learn it!’” Downey Jnr breaks into a cheeky grin. “He did have a point.”

This article was first published in CityLife magazine in 2005.