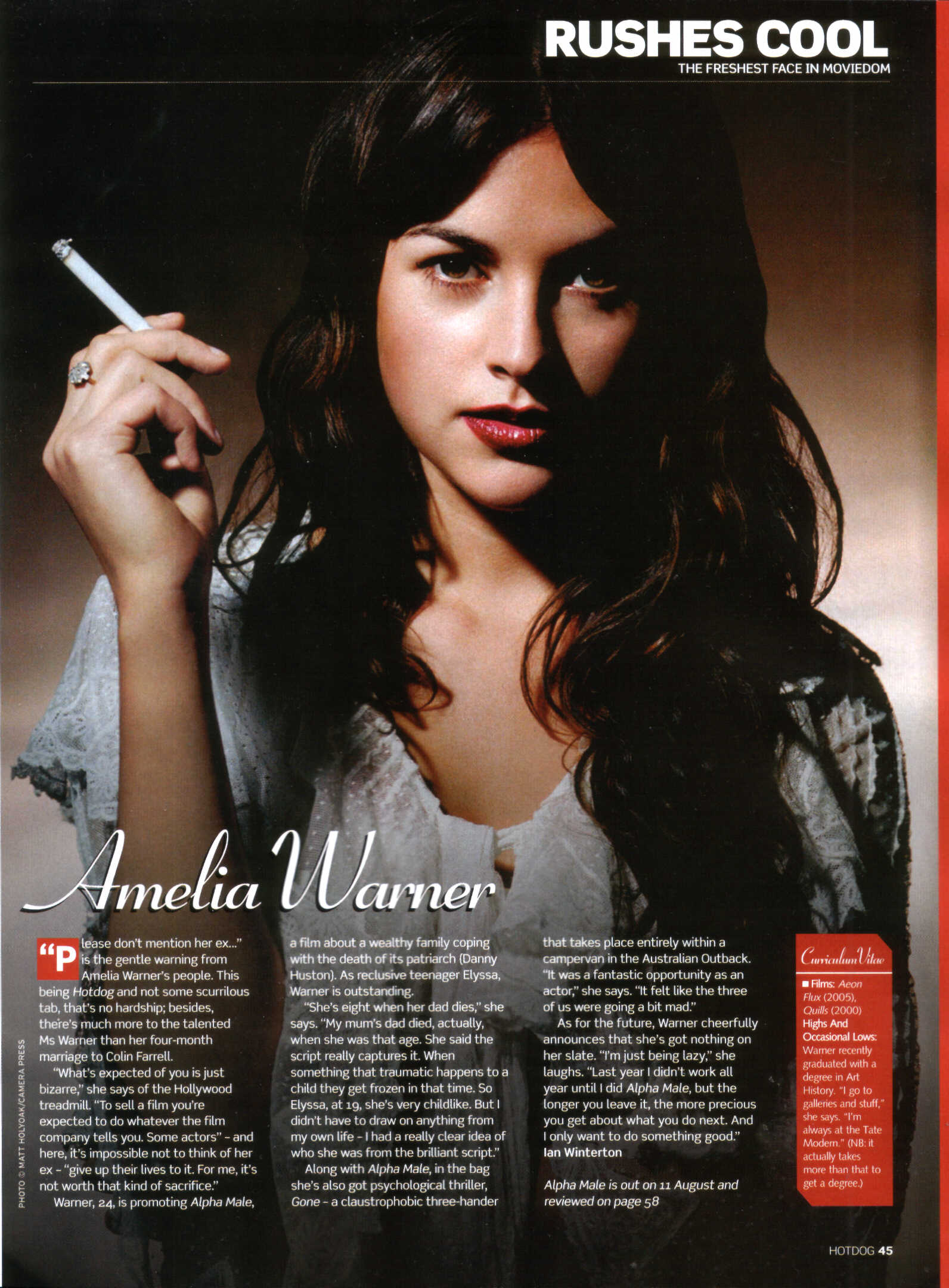 “Please don’t mention her ex…” is the gentle warning from Amelia Warner’s people. This being Hotdog and not some scurrilous tab, that’s no hardship; besides, there’s much more to the talented Ms Warner than her four-month marriage to Colin Farrell.

“What’s expected of you is just bizarre,” she says of the Hollywood treadmill. “To sell a film you’re expected to do whatever the film company tells you. I think some actors” – and here, it’s impossible not to think of her ex – “give up their lives to it. For me, it’s not worth that kind of sacrifice.”

Today Warner, 24, is promoting Alpha Male, a film about a wealthy family coping with the death of its patriarch (Danny Huston). As reclusive teenager Elyssa, Warner is outstanding.

“She’s eight when her dad dies,” she says. “My mum’s dad died, actually, when she was that age. She said the script really captures it. When something that traumatic happens to a child they get frozen in that time. So Elyssa, at 19, she’s very child like. But I didn’t have to draw on anything from my own life – I had a really clear idea of who she was from the brilliant script.”

First time writer-director Dan Wilde seems to have been a hit with Warner.

“Oh yes,” she admits. “He’s amazing. And lovely. And he’s very smart, very clever – he’s got a degree in philosophy.”

Warner herself recently graduated with a degree in Art History (she has a penchant for German Expressionism), although she sounds rather despondent when asked if she’s pursuing anything connected with it.

“No, but I go to galleries and stuff. I’m always at the Tate Modern.”

Along with Alpha Male, in the bag she’s also got psychological thriller, Gone – a claustrophobic three-hander that takes place entirely within a campervan in the Australian Outback.

“It was a fantastic opportunity as an actor,” she says. “It felt like the three of us were going a bit mad. And it’s beautifully shot. I’m really excited about it coming out.”

As for the future, Warner cheerfully announces that she’s got nothing on her slate.

“I’m just being really lazy,” she laughs. “Last year I didn’t work all year until I did Alpha Male, but the longer you leave it, the more precious you get about what you do next. And I only want to do something good.”

This interview was first published in Hotdog Magazine in 2006.