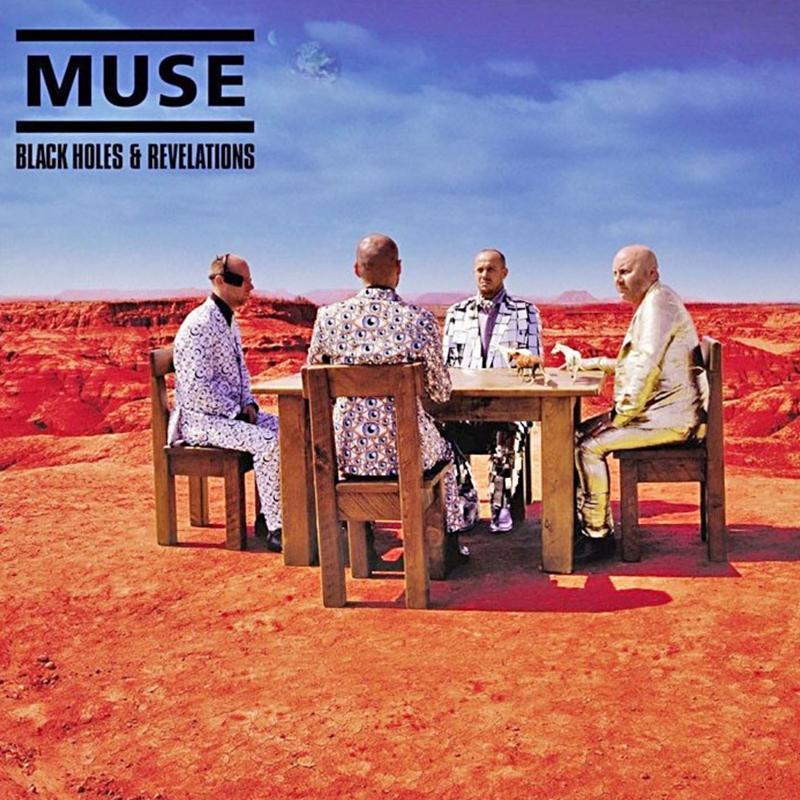 It’s midday on a Friday and I’ve accidentally got drunk. Now, the floaty, vaguely tripped-out feeling may be down to the four pints I’ve just glugged down, but I’m more inclined to blame the fact that I’ve been locked in a bar in London’s Soho Hotel with a dozen journalists for the playback of Muse’s new album. It’s a fantastically weird mix of prog-rock, electro, metal and sci-fi noodlings Hawkwind would have been proud of. And, at the stipulation of the band’s management, we had to listen to it twice, “in case we missed something”.

So, yeah, I’m feeling a little odd when, in a suite upstairs, I get to meet the man behind the madness, Matt Bellamy. In contrast to myself, he turns out to be both sober and sane, not to mention thoroughly pleasant and polite. With his designer casual clothes, prominent cheekbones and scrunchy hair, you’d sooner imagine him folding up jumpers in a swanky clothes shop than fronting one of the UK’s most successful rock bands. Then again, Muse have never been associated with rock ‘n’ roll excess. I put it to him that the band’s clean living is one reason they’re still going strong a decade after their debut album.

“We’ve had some very good times on tour in the past,” he says a tad defensively. “And we were young guys and at one point we were all single, but I don’t think we need to tell everyone about it. We’ve always wanted to get attention for being good musicians and for making good music.”

And good music they most certainly do make, although it’s not to everyone’s taste. For some, it’s silly, pretentious and overblown. To those who’ve drunk from the cup, however, it’s silly, pretentious and overblown. AND THAT’S THE POINT. With Black Holes And Revelations, Bellamy and his fellow bandmates – Chris Wolstenholme (bass) and Dominic Howard (drums) – have really pulled out the stops. In between beers during the playback, I jot down the names of other bands that come to mind, producing a list that includes New Order, The Scissor Sisters, The Pixies, Pet Shop Boys, Ennio Morricone and Spinal Tap. 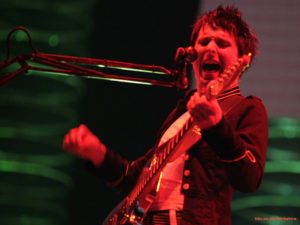 “Yeah, we’ve got Morricone and flamenco going on,” Bellamy allows. “We recorded some sections in Northern Italy, which is why I think we took on that south European sound. I’ve always loved that stuff but never found a way of getting it into the songs. I tried a bit on the second album with Screenager but it came out a bit crap.”

“Cydonia is the area of Mars where they think there’s that big-faced temple thing. Mars used to be the same distance from the Sun as we are now and so some people think that maybe there was a civilisation there. I find that idea quite appealing.”

In amongst the electro and the flamenco, it’s still the same old Muse: Bellamy’s falsetto vocals, pounding drums and loud ‘n’ fast rock guitar. For me, all the disparate elements of the album come together on the brilliantly titled closer Knights Of Cydonia. It begins with laser-guns and horses galloping.

“We really pushed that song to its limits,” says Bellamy. “We pushed the fantastical elements so far, maybe too far, so it sounds like a sci-fi film. Cydonia is the area of Mars where they think there’s that big-faced temple thing. Mars used to be the same distance from the Sun as we are now and so some people think that maybe there was a civilisation there. I find that idea quite appealing.” 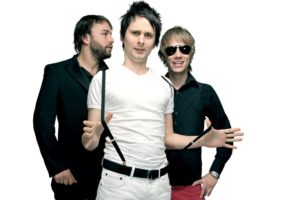 Which brings us to Bellamy’s much publicised love of conspiracy theories and other wacky notions. Interviewed in the Guardian, he admitted that he found a lot of David Icke’s ideas compelling. Maybe he is mad after all. Are the giant lizards of the Babylonian Brotherhood running the planet?

“I think that’s a little far fetched,” he laughs, adding, “It’s a slippery slope. Once you start reading that stuff it takes you over a bit. I quite like alternative thinking. My girlfriend studies psychology and she’s working in a hospital in Milan where there are patients that actually believe the end of the world is nigh and that sort of thing. It’s interesting hearing about people who’ve been completely overtaken by these theories.”

How are they going to reproduce the sound of such a wilfully diverse and bonkers album live?

“With great difficulty!” Bellamy exclaims. “But we’ve actually got a fourth person in to do some of the electronic stuff for the first time. Morgan Nicholls, who’s actually in The Streets, took over on bass when Chris broke his wrist. It turns out he’s a really good keyboard player. We decided that next time we should give him a go.”

As thousands of fans can testify, Muse are awesome live – and, unlike most bands, they’re actually better playing huge gigs. Are they excited to be playing Leeds and Reading?

“Absolutely,” enthuses Bellamy. “Reading and Leeds are the biggest rock festivals you can play.  When I was younger I remember seeing bands playing there – I saw Jeff Buckley, one of my all-time heroes, there in ’94 and I remember thinking if I could get up there it would be amazing. Also, it feels nice to be a band that can do a gig like Glastonbury but also do Reading and Leeds, which is more of a rock audience. It’s nice to be able to move between the two.”

Just look out for those giant lizards.

This article first appeared in The Leeds Guide magazine in 2006.