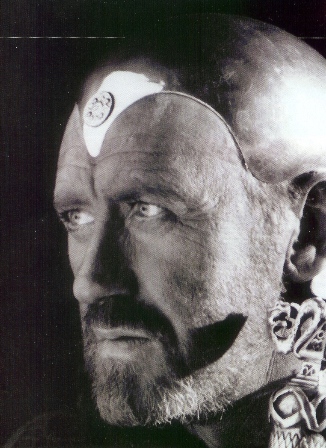 He wore the metal skull cap and walked in the dragon’s breath. The big loony. One of Britain’s greatest actors – and biggest pains in the ass – puts the mental into Merlin

“The Dark Ages – the land was divided and without a king. Out of those lost centuries rose a legend… Of the sorcerer Merlin, of the coming of a king, of the sword of power… EXCALIBUR.”

So begins Excalibur, John Boorman’s definitive Arthurian movie. Based on Sir Thomas Malory’s romanticised version, it’s a world where shields glint, swords clash, knights wear armour even when feasting and everyone shouts. But no one shouts more loudly, or more weirdly, than Nicol Williamson’s Merlin.

We first see him striding towards us, swathed in mist, dressed in raggedy robes. His eyes, staring from beneath a steel skullcap that’s all but welded to his head, scream intelligence. And madness… a madness confirmed by the voice. A unique mix of growling, high-pitched hysteria and, best of all, inappropriate pauses, it’s the sound of “the greatest actor since Marlon Brando” (thanks John Osborne), losing a battle with his ego. And it’s awesome.

Although Boorman, fearing that famous faces would detract from the legend, cast unknowns, Williamson was the exception. Scottish born, he was one of the most celebrated Shakespearian actors of the Sixties and Seventies and was well known in the States, not least because he performed a Hamlet for that other troubled prince, Richard M Nixon.

Ironically, he was one the one actor that Boorman had to fight with the studio for. Williamson’s reputation was beyond dreadful. One story has it that, while touring Hamlet in the US, he exhibited behaviour so abominable that a fellow thesp felt obliged to apologise to the audience. Boorman, though, knew what he was doing. Williamson: brilliant, boorish, unpredictable egomaniac. Remind you of anyone?

“I have walked my way since the beginning of time. Sometimes I give, sometimes I take – it is mine to know which and where.” 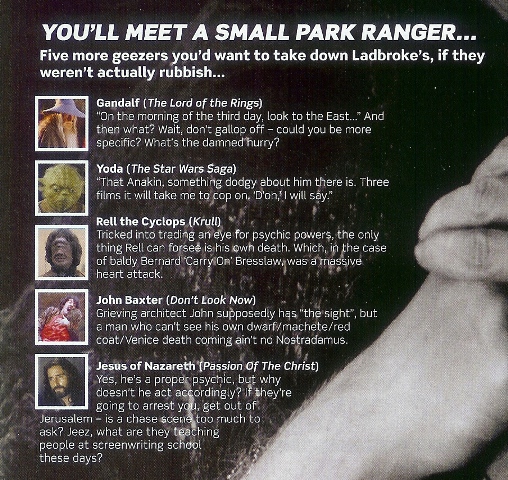 Aided by his second sight, Merlin has meddled in the affairs of men for centuries, though with what success is debatable. Having decided that Uther Pendragon is destined to reunite the kingdom, Merlin gifts him Excalibur. This does the trick but, at the celebratory banquet, Uther starts to covet Lord Cornwall’s missus and war is back on the menu before they’ve even had dessert. Merlin then employs the magical equivalent of Rohypnol, enabling the horny king to bed Mrs Cornwall. His one proviso: “What issues from your lust shall be mine.” Luckily for Merlin, he doesn’t just get a beaker of baby-batter, but Arthur.

Merlin takes instantly to Arthur, perhaps because he’s one of the few mortals to confound his clairvoyance. When the king hands Excalibur to rebellious baron, Uryens, telling him to knight him or kill him, Merlin delightedly murmurs, “I never saw this.”

One thing Merlin fortells only too well is the king’s accursed love life. “You have a land to quell before you start this hair pulling and jumping about,” he chides when Arthur speaks of his love for Guinevere. Arthur isn’t listening and, like Uther, asks Merlin to make her love him. Merlin explodes.

“I once stood exposed to the dragon’s breath so a man could lie one night with a woman. It took me nine moons to recover and all for this lunacy called love, this mad distemper that strikes down both beggar and king. Never again!”

Merlin himself isn’t immune to love, though. Between him and Helen Mirren’s Morgana, there exists a simmering frisson of attraction and loathing. “Perhaps,” she taunts, “you ache for what you’ve never known.”

That this love-hate relationship is so convincing is due to the fact that Mirren and Williamson, former lovers, detested one another. To both actors’ irritation, Boorman put the two together so he could tap into their “awkward friction”.

Excalibur’s parallels with Williamson’s life run deeper than that. Just as the film shows Merlin’s last days, it also marks the high point of Williamson’s fame. While his ‘unknown’ co-stars – Patrick Stewart, Gabriel Byrne, Liam Neeson – have become household names, Williamson hasn’t acted for years. “There are other worlds,” Merlin muses. “This one is done with me.” For Williamson, this translates as retirement on a Greek island.

He may have been one of the 20th century’s best Hamlets, but it’s as Merlin he’ll be remembered by most. Fittingly, his last screen role was Cogliostro in Spawn, a man later revealed in the comicbooks to be, yes, Merlin.

“He’s in our dreams now,” Arthur says. “He speaks to us from there.”

Or, in a sentiment no doubt echoed Williamson’s former colleagues, as Merlin himself puts it:

“A dream to some – a NIGHTMARE to others!”