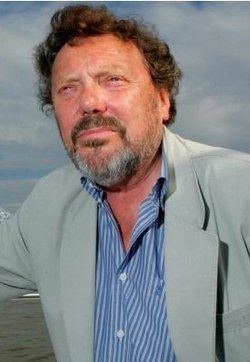 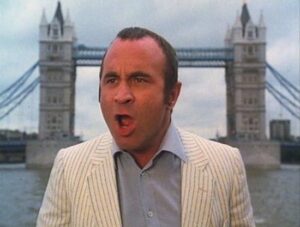 A pleasure cruiser chugs up the Thames in the mellow sunlight of a beautiful summer evening. On board, a handful of journalists sip champagne on deck, watching London slide past – the Eye, the Town Hall, swanky apartment blocks and, up ahead, that little slice of Downtown Manhattan, Canary Wharf.

“I love it,” enthuses John Mackenzie, a film director who looks like a weather-beaten version of Jeremy Beadle. “I think it’s fantastic. I love high-rise buildings. I want them to spread up the river some more.”

Having been in the business since the late sixties, Mackenzie’s best known for classic Brit gangster movie The Long Good Friday, the Special Edition DVD release of which has prompted today’s jaunt.

Back in 1980, according to Environment Secretary Michael Heseltine, Docklands represented “more acutely and extensively than any area in England the physical decline of the urban city and the need for urban regeneration”. 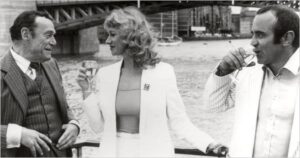 In a word, it was a shit-hole. Mackenzie knows better than most how radically Docklands has changed. Not only was the site utilised for its grimy locations, but it was integral to the plot. The film’s antihero, Harold Shand (Bob Hoskins), is a gangster desperate to turn legit who sees the undeveloped wasteground as the key to his salvation. Twenty-five years on, it adds an air of prophecy to an already outstanding film.

We’re below decks now, in a dining area that, alarmingly, recalls the room in the film where Hoskins brutally thrusts a wine glass into the neck of Derek Thompson, who later found fame as Charlie in Casualty. He’s just one of many ‘faces-of-the-future’ that further bolster the film’s visionary credentials. There’s Dexter Fletcher, Helen Mirren, Eastenders’ Gillian Taylforth and, as a homoerotic hitman, Pierce Brosnan. Mackenzie humbly attributes this talent spotting to “great casting director”, Simone Reynolds.

“Brosnan… As soon as we put him on the
screen… click.”

“She wheeled ‘em in and I picked ‘em. I’m a great believer that some people are born for celluloid. Brosnan was. As soon as we put him on the screen… click.”

With a first-rate supporting cast and a phenomenal performance from Hoskins, …Friday was considered an unequivocal success by all involved. Except the backers.

“They thought it was unpatriotic and pro-IRA,” Mackenzie recounts. “They thought they’d have their cinemas bombed. I said, ‘If it’s pro-IRA, why would they bomb it?’ They decided they’d sell it as a package for TV and chop it down from 105 to 70 minutes.”

If that wasn’t insulting enough, the company took the astonishing decision to dub over Hoskins’ allegedly impenetrable Cockney accent. 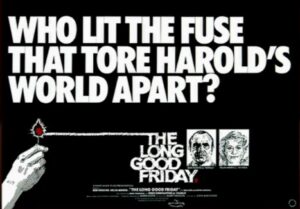 “I was so incensed when I heard about this that I went crazy in a corner of Soho,” laughs Mackenzie. “But, as it turned out, that was our ace card because they’d just gone too far. Bob was going to sue them and he got all sorts of high-profile actors like Alec Guinness willing to stand up in court. They got scared and so, when George Harrison and his Handmade company got involved, we were able to buy it pretty cheaply.”

A modest hit when it was eventually released, …Friday has since come to be recognised as one of the best British movies ever. Its influence can be felt in numerous other films, both homegrown (Lock, Stock) and foreign (Pusher). Given its popularity, it’s perhaps unsurprising that rumours of a sequel have been rife. Surely this would ruin the film’s audacious ending?

“I killed Harold 25 years ago and he’s staying dead.”

“It would,” agrees Mackenzie, “which is why I would never do one. But I’ve been inundated by Bob and Barry [Hanson, producer]. Because you never saw Harold get killed, they want him to have jumped out of the car or something. But there’s no way I’m going to cheat like that. I killed Harold 25 years ago and he’s staying dead.”

This article appeared in Hotdog Magazine in 2005.