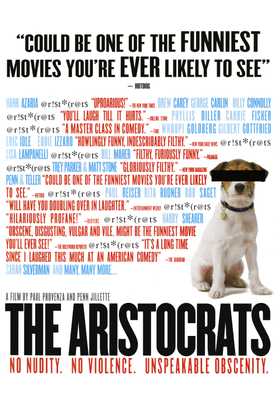 By Ian Winterton
First published in CityLife magazine in 2005

There’s a T-shirt, popular with scientists I’m told, that bears on its front the legend: “Memes don’t work”, while the reverse reads, “Tell a friend.” I think this is a great joke (because it makes me feel clever), which not only shows exactly how subjective comedy is, but how jokes work mimetically. For instance: did you ever hear the one about the man who went into a theatre agent’s office and said, “I’ve got a great act”? No? Well, now you have.

The joke, known as The Aristocrats, is the subject of an astounding new documentary by comedians Penn Jillette (the larger half of magicians Penn & Teller) and Paul Provenza, whom I meet for morning coffee in the Sheraton hotel during the Edinburgh International Film Festival. He’s a good-looking, square-jawed Italian-American, wearing a bright blue T-shirt that, while not sporting a dubious gag about memes, does show several photos of John Cleese performing his famous ‘silly walk’.

“We can trace it back at least as far as the mid to late nineteenth century,” he says in his confident, New York accent. “Jay Marshall, the older gentleman who first tells the joke in the film, he just died about two months ago at the age of 84. He first heard the joke when he was seven years old, by a guy who was in his eighties.”

Provenza finds it hilarious that “they think the perfect time to tell a child this joke is when they’re seven”. The joke is, you see, one of the filthiest ever told.

“We chose it because it’s got a set-up and a punchline and in between there’s a wide-open field,” says Provenza. “There’s no actual record of what that middle part is, but it usually contains sex, incest, scatology, bestiality. But it’s all subjective. In some parts of the world the joke would be about a guy eating pork.”

Needless to say, the pork joke doesn’t make it into Provenza’s movie. It’s outrageously foul and, therefore, one of the funniest movies ever made. But, in setting out to make the film, Provenza and Jillette’s intentions were serious.

“When Penn and I get together we talk very pretentiously about art, philosophy, politics, pussy – whatever it is, we’d talk pretentiously about it,” Provenza explains. “Penn was obsessing about jazz improvisation – what is genuine improvisation and what is just a sort of twisted recapitulation of something you’ve already heard? I said, ‘You know you’re talking about comedy?’ and then we started talking about the similarities between jazz and comedy.”

This line of thinking inspired the duo to investigate what it was that made comedians uniquely funny. They chose the Aristocrats.

“Not because it was transgressive,” Provenza insists, “but because it was simple. If you wanted to do the same with jazz musicians, you wouldn’t have them all perform Mozart, you’d have them do Mary Had A Little Lamb. And, with the Aristocrats, so many comedians already knew it so we didn’t have to explain anything. Everybody was on the same page right away.”

“We had to put that on,” says Provenza, “because, in the States, we have this thing that everything public has to be clean. Every journalist in the US asks us about the language, whereas in the UK, no-one could give a shit.”

At the time of our interview, Provenza hasn’t had much feedback from the British public (its UK premiere, later that evening, goes supremely well), nor indeed from our comics. This being the Edinburgh Festival, I tell him that I found myself having a pint with Stewart Lee the previous day who, it turned out, caught The Aristocrats while in the US. He looked at me very seriously and said, “That film is great. It totally made me reappraise my attitude to comedy. In fact, if I hadn’t seen The Aristocrats, I wouldn’t have written the act I’m performing this year.”

Provenza is delighted to hear this.

“I’m taken aback,” he exclaims. “That’s the hugest compliment I could ever get. I’m really, really, really in a good mood now. Stewart is phenomenal. One of the best stand-ups around. He makes me weep, he’s so funny.”

Later on, at Provenza’s invitation, I’m sitting in an audience comprised entirely by comedians who are in Edinburgh for the festival. As well as Lee, faces I spy include Jimmy Carr, Stephen Merchant, Barry Cryer, Andy Zaltzman, Lucy Porter, Brendon Burns, Dara O’Briain and Andy Parsons. When Provenza introduces the film, the warmth of the reception is palpable – he is clearly a well-loved figure. The film goes down incredibly well. Having seen it before, I get to watch the audience reacting, a pleasure equal to viewing the film for the first time.

“That’s why you’ve got to see this film in a theatre,” Provenza had told me before. “Half the fun is that the laughs aren’t all universal, and neither are the points at which some people walk out in disgust.”

No-one walks out during the comedians’ screening. It seems, as had happened in the States, comics have embraced the film.

“If comedians didn’t get it,” says Provenza, “that would mean we’ve got it really wrong. But they love it, not just because it’s funny, but because you get a real sense of camaraderie. Even though we shot 100 people in 100 different locations, there really is a sense that they’re in the same room. It’s got that sense of community that nobody has really captured before.”

And, importantly, it acknowledges stand-up as an artform.

“Yes,” agrees Provenza. “Everybody thinks they can do comedy just because they can make your friends laugh. They think they have what it takes but maybe they’re not up on stage. If Tchaikovsky’s up there on the piano, you wouldn’t think you were as talented as him just because you can play chopsticks. Comedy never gets the respect as an artform.”

The Aristocrats may change that. Or it may not. Either way, its barrage of “unspeakable obscenity” is stomach-crampingly funny. It really is. So spread the word. Tell a friend.