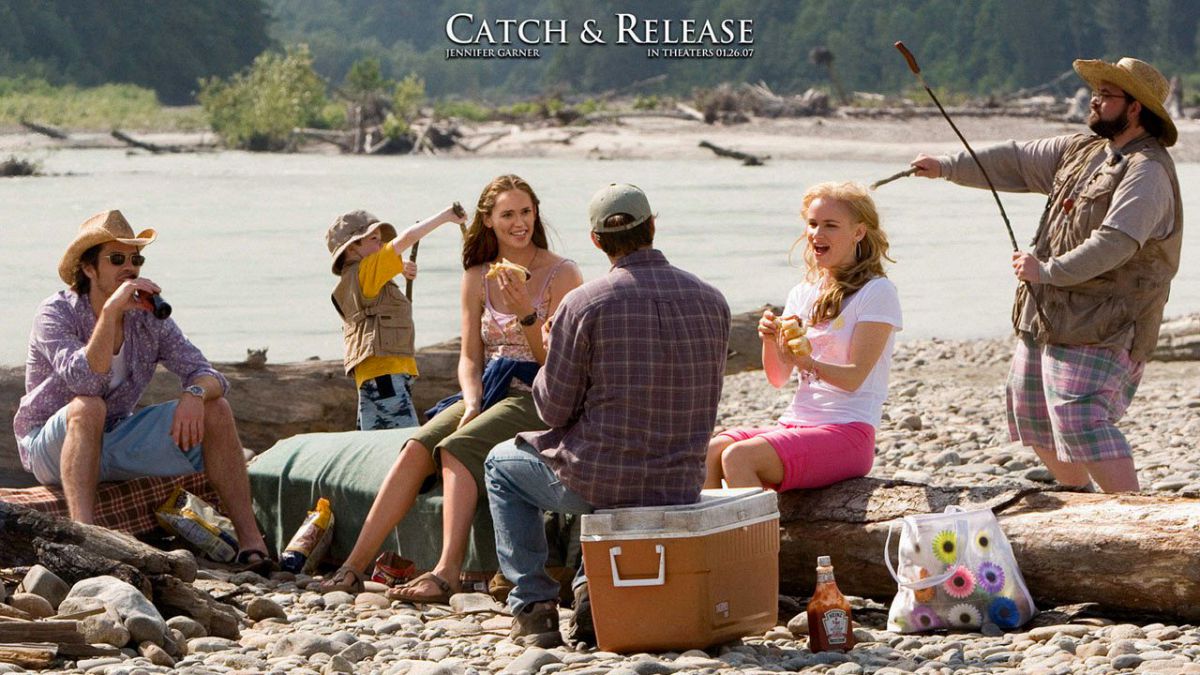 Following the sudden death of her fiancé a woman finds herself sharing a house with his three fishing buddies. Together they face up to their loss and find a way to get on with their lives.

As a screenwriter, Susannah Grant specialises in stories about harassed women overcoming insurmountable odds. While clunkingly predictable, they usually have a spark of something special and, more often than not, an A-list star pulling out all the stops (Julia Roberts in Erin Brockovich, Toni Collette in In Her Shoes). Unfortunately, not only is Catch And Release Grant’s weakest script in years, but its leading lady, Jennifer Garner, appears to have undergone charisma-bypass surgery for the role. Worse still, this is Grant’s directorial debut – on the basis of this she’d do better to remain chained to her laptop.

Garner plays Gray, a woman whom we first meet at the funeral of her fiancé, Grady (the fact that they have such laughably similar names is just the first of many missteps by Grant). While Gray’s looking wistful and fighting back tears, we get to meet Grady’s fishing buddies, and what a bunch of twats they are. Although, supposedly, they’re meant to come across as lovably flawed blokes. There’s wet, moping lovelorn Dennis (Jaeger) who just can’t seem to get a girl – is he gay or does he harbour a darker secret? And fat stoner Sam, who’s basically The Simpson’s Comic Book Guy made flesh – that is, he’s played by Kevin Smith, who probably spent his entire time on set marvelling that he was in the midst of a worse romantic dramedy than his own Jersey Girl. His performance, too, proves that he’s as bad an actor as he always insists he is on his blog; one can’t help but wonder how much better Grant’s first choice, Smith’s buddy Jason Lee, would have been as comic-relief slacker (Lee turned it down to voice Syndrome in The Incredibles).

Last, but not least, of Grady’s friends, is Fritz (Olyphant, currently being awesome as Sheriff Bullock on HBO’s Deadwood), a handsome philanderer. Though Gray, hiding behind a shower curtain, is forced to listen to him having a swifter-than-swift bunk up with a one of the funeral’s caterers, it’s not long before she falls in love with him. This transition is helped by a series of revelations that paint her dead lover in a less than favourable light (including the revelation that he’d been conducting an affair with a trashy masseuse – Juliette Lewis – in LA) and the fact that Fritz’s womanising clears up quicker than flu in a Lemsip ad.

So, yes, all hideously straightforward, with a tortuous plot that relies on the sort of accidental over-hearing usually reserved for sitcoms. In the plus column, there’s really nothing positive to say which just leaves the obligatory fishing-related witticism: if this film ended up on the end of your hook, it would turn out to be an old boot.

Dreary, lacklustre and featuring a sleep-walking cast, this is easily the worst film Grant’s ever been involved in. To see one of her better scripts translated to the screen, you’d do better to check out the brilliant kids’ film, Charlotte’s Web.