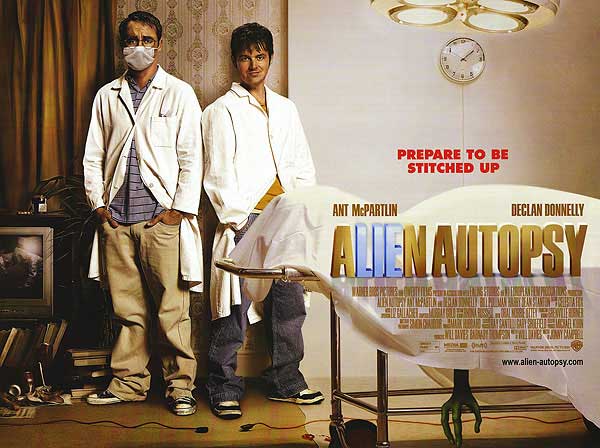 Based (incredibly loosely, one suspects) on the true story of British scallies Santilli and Shoefield, played by, as Bill Nighy appropriately refers to them in Love, Actually, “Ant or Dec”. When Santilli’s quest for Elvis memorabilia takes him and his friend to Cleveland, Ohio, he’s approached by an old-timer known as Harvey (a reference to James Stewart’s imaginary rabbit?) played by grumpy-but-loveable Harry Dean Stanton. He shows Santilli a film we’re told (but never shown) depicts the autopsy of an alien, said to have been recovered from the legendary Roswell crash-site in 1947.

Santilli brokers a deal for $ 30,000 between Harvey and a UFO-obsessed gangster, Laszlo, and brings the film home. Unfortunately, the celluloid, exposed to the elements, has “eaten itself” and is now blank. Fearing retribution from Laszlo, Santilli and Shoefield recruit their bumbling friends and, somehow, create a fake good enough to save their necks. This success inspires them to take the con further and, as in real life, their home-made film ends up being watched by billions of TV viewers around the world.

The premise might be clever-clever but the execution is distinctly average. It’s better when dealing with the Santilli and Shoefield and their fellow hoaxers (especially kebab-shop owner turned tortured auteur Djalili) and Ant or Dec are actually pretty good – all those years on Byker Grove must have paid off.

There’s an awful lot that doesn’t work, though. Part of the film is, rather pointlessly, told by our heroes in the present day, interviewed by a documentary filmmaker played by Bill Pullman. This device occasionally intrudes on the narrative, giving us talking-head interviews with CIA operatives and the like, none of which gel with the rest of the film. And, when the hoax escalates, the film collapses under its own ambition (not to mention budget) – we’re never convinced that Santilli and Shoefield are engaged in multi-million dollar negotiations with the world’s TV reps – and the whole thing ends with a disappointing whimper. It is good, though, to see genuine footage from some of the many documentaries put together by the world’s TV networks, one presented by Star Trek’s Jonathan Frakes, looking very beardy.

A distinct made-for-TV vibe is elevated by a good British cast and some funny moments. ‘Ant or Dec’ are amiable enough and could carve themselves a movie career, but only if they move on to stronger projects than this. Fluffy fun, but nothing particularly – sorry – out of this world.