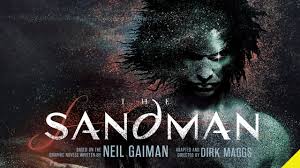 With Audible’s Sandman adaptation due out in July, Ian Winterton spoke to radio drama pioneer Dirk Maggs about his 30 year quest to turn Neil Gaiman’s ground-breaking comic book into an “audio movie”.

“I will show you terror in a handful of dust.”

These words, featured in print adverts in 1988, introduced the worl d to a new comic book series from DC’s Vertigo imprint: The Sandman. Written by a then largely unknown Neil Gaiman, it told the tale of Dream, known to many as Morpheus, one of the seven Endless. A dizzyingly brilliant blend of mythology, history and fantasy, it quickly transitioned from cult hit to mainstream success and Gaiman, along with Alan Moore and Frank Miller, became part of the late-80s graphic novel renaissance.

Unlike countless other comic book creations, Sandman was never adapted into other mediums – until now. But it’s not a film, or a TV series or a video game, but an audio drama, with no less a legend than Dirk Maggs at the helm. A pioneer in

the field these past 30 years, his innovative and varied body of work includes radio versions of Batman, Spider-Man, Superman and Judge Dredd.

“I discovered early on,” he says, “in the late 80s, early 90s, that I had a knack for taking comic book material and editing and massaging it in such a way as to make driving, exciting audio which sounded just like a film but had no pictures – which were created in the listener’s brain. We expanded into Dolby Surround, we introduced especially composed scores – it was all happening.”

Of all the superheroes getting what Maggs describes as his “audio movie”, there was one above all others that he was desperate to adapt: Sandman.

“DC at that time were based in New York City,” Maggs recounts, “and I hit it off especially well with their Business Affairs Manager, Phyllis Hume, a feisty no-nonsense Brooklynite who had a wonderfully dry sense of humour and didn’t waste praise where it wasn’t earned. She told me to read this ‘amazing’ new series coming out on DC/Vertigo. I read the first issue and was blown away. It was a monumental work of literature written for a 22 page comic book –punchy, direct, uncluttered by stereotypes, and exactly the sort of material I knew I could turn in amazing audio.”

He pitched it to the BBC and… they passed.

“It was frustrating,” he sighs, “but Neil wasn’t the figure he is nowadays and they were wary about having too much comic book entertainment – wary of ‘dumbing down’,  perhaps. It made no sense to me because it was ready made for the audience the BBC networks – particularly Radio 4 – supposedly wanted to attract: anyone under 50, basically. I pitched it several times over the years, but they just couldn’t see it, not even when Neil became a respected and applauded novelist and screenwriter.” 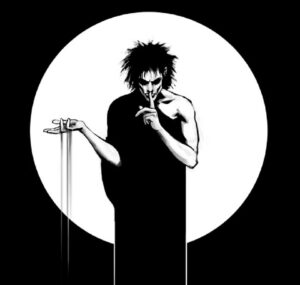 Disappointing though this was, Dirk’s correspondence with Gaiman turned into a friendship – and they discovered that they had both been close to Douglas Adams, the author of The Hitchhiker’s Guide to the Galaxy who died aged just 49 in 2001.

“Neil was mentored early on by Douglas,” says Maggs, “while he changed my life when he chose me to adapt his later Hitchhiker novels for radio.”

This flurry of activity coincided with one of the stranger consequences of our internet age: the return of audio drama. Though it had never gone away for UK citizens, thanks largely to BBC Radio 4, audiences across the globe rediscovered this lost artform. And were willing to pay for new content.

Enter Amazon’s audiobook arm, Audible, brandishing chequebook. Maggs, with his reputation for turning properties with cult cache into unmissable radio, was tasked with adapting Alien spin-off novels. The results were astounding and, as many reviewers noted, far superior to the dreary prequels being churned out by Ridley Scott at the same time.

Then it happened – DC contacted Maggs and Audible: would they like to adapt Sandman?

“I many ways it’s perfect that we’ve had to wait,” is Maggs’ philosophical take. “Neil says he’s glad, too, because we’re better at what we do. The Sandman is like a good wine – it grows richer and more complex the older you leave it, and I don’t think I could have brought out half of its quiet complexities 25 years ago.”

And there’s the added bonus of Amazon-Audible’s deep pockets, which enabled Maggs to assemble a huge cast, including many “very famous” actors – none of whom Maggs can yet reveal.

“Strictly embargoed, I’m afraid,” he says. “But all I’ll say is it’s strange we didn’t record in Los Angeles considering the Hollywood talent we secured.”

Of Dream, himself, Maggs won’t be drawn, except to say that the actor in question was his first and only choice.

“Oh heck, what can I say? He was always there. He has exactly what Dream needs to come to life … and he is amazing.”

Recording was divided between London, New York and Atlanta, Georgia – the location of The Walking Dead’s production base. If there’s a conclusion to be drawn from that, Maggs is keeping his lips firmly zipped. Either way, it’s “by far the biggest cast” Maggs has ever had on a single project.

“I make it 70, on a quick head count. All are brilliant, there really are no exceptions. Everybody brought their ‘A’ game. In the ensemble sessions last October we had up to 15 people at any one time in a studio built for a third of that number. But everybody was so into the material, and the characters and stories themselves are so gripping that where possible I ran the whole story in one go, recorded voices-only to the mics. It was absolutely enthralling to hear it performed like that. And it wasn’t just the stars who made it sing – the whole ensemble absolutely soared into the realms of Dream. Listening to it now, in post-production where I’m currently labouring, it’s all sounding amazing.”

One cast member who has been announced is Neil Gaiman himself, on board as the narrator. To create the narration, Maggs made the inspired choice to draw, not only on the words printed in the comic books, but Gaiman’s actual scripts.

“It is one of the most exciting things about this project,” Maggs enthuses. “The scripts are  a window into what is going on in Neil’s mind, as he is writing the stories. And they are poetry. There’s a scansion to his writing, a rhythm that can be gentle or formal, from blank verse to iambic pentameter – and of course Will Shakespeare does feature in two of the stories in this first series. Part of the joy of the process was to hear our actors – some senior Shakespearian ones too – breathing life into these lines, lifting them off the page, giving them that rhythm. There were times in studio where shivers ran up my back as dialogue I had only ever read off the page burst into vibrant, living existence.”

Maggs even incorporated a passage from Gaiman’s private papers.

“It’s never been heard, or read by anyone but Neil,” Maggs explains. “He wrote some background on the creation of Dream’s talisman, his Ruby, and I placed it during the confrontation with Doctor John Dee, because it’s the subject of the story and it is beautiful and riveting.”

The whole experience has been a “privilege” says Maggs. And not, it would seem, just for him. Gaiman himself has quietly expressed a joy at revisiting stories he wrote 30 years ago, though he doesn’t recognise the person he wrote them as himself. Maggs says:

“At the end of a particularly good mixing day a short while ago I emailed Neil and said, ‘This stuff just comes alive – damn, you’re good.’ He came back saying he’s not sure he recognises the person who wrote it because it was so long ago. I assured him that whoever that person was, they had created magic – and it translates beautifully into our strangely visual realm of pure audio.”

A slightly shorter version of this feature appeared in SciFiNow in April 2020.