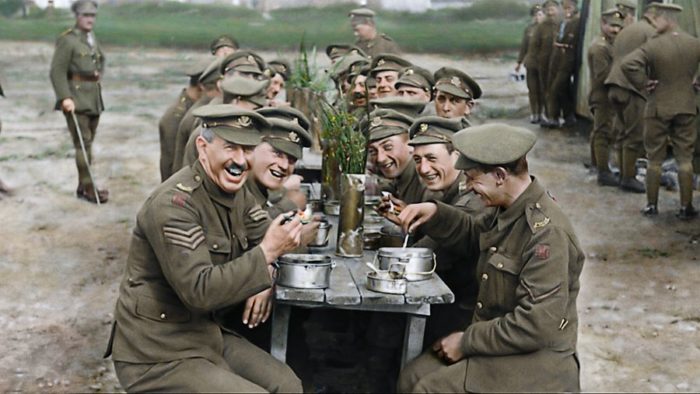 Using restored and colourised footage, this soldiers’ eye view of The Great War is astonishing and moving.

Dedicated to his grandfather, who served in the British Army 1910-1919, Peter Jackson’s documentary is both an astounding piece of filmmaking and a moving tribute to the millions of men who fought on all sides during World War I.

The film begins in straightforward manner, with the voices of veterans overlaid on familiar grainy, black-and-white footage of the period. We hear of the outbreak of hostilities, the clamour to join up, and the comradely holiday-camp feel of basic training. It’s absorbing and fascinating, and, at first, one doesn’t quite notice the tone change: panic creeps into the veterans’ narration and, suddenly, as the fear hits – this is “deadly warfare” – the image on screen enlarges and the scene of troops marching through muddy fields becomes saturated with colour.

This double-whammy – the breathtaking images coupled with the emotional impact of hearing real men recount their experiences – continues throughout. It makes They Shall Not Grow Old one of the most important and effective wartime documentaries ever made.

Jackson’s team of CGI wizards – taking time off from rendering Gollum or King Kong – have performed miracles here. For anyone whose expectations of colourised black-and-white stem from unhappy experiments on Laurel & Hardy and Charlie Chaplin movies, it’s suffice to say that this is several thousand times more sophisticated. The colours here are as lush, varied and detailed as they would be in real life. In addition, the frame-rate has been slowed down, so we’re treated to WW1 soldiers moving as they would have done at the time, not in the jerky, speeded-up fashion seen in news reels.

As well as some 3D effects being used on the images to breathe even more life into them, the coup de grace is Jackson’s decision to add sound too. As with the moving images, the attention to detail employed on the soundtrack is jaw-dropping. Not only have the foley artists excelled themselves – every boot-step, neighing horse, rumbling tank-track or exploding shell sounds as though it was recorded along with the pictures – but we hear the men speak too. Making the audacious but genius decision to use lip-readers, Jackson gives voice through actors to men who have been silent for a century. The result is to bring to life small exchanges that would have previously been unnoticed. There are dozens of contenders but one stand-out sequence sees a smiling Tommy ask a German POW: “Want yer ‘at back?” It’s a tiny moment, but one full of humanity and warmth in the midst of such horror. What’s more, it’s not just a dramatic reconstruction – a hundred years ago this happened, exactly as we see it.

As the film progresses through the war, we’re drawn inevitably to the horrific maelstrom of all-out battle. We’ve seen these sequences before – soldiers gassed, troops stumbling over the top, trenches filled with the dead and the dying, tanks rolling over shell holes – but rendered here with sound and colour is like seeing them anew. Most of all, the sight – and now sound – of shell bursts, so close to whoever is holding the camera, is truly shocking.

As we commemorate a century since the Armistice, this brilliant film is essential viewing. It’s a respectful memorial to the men who served and died, yes, but most of all, it’s a reminder that they lived and breathed and laughed and cried. Just like us.